>Winter Week 7—Back on Track? 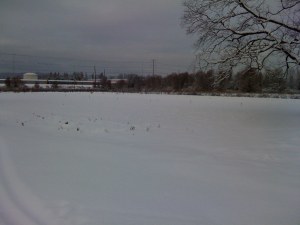 The snow is finally melting, and is nearly gone. Don’t get me wrong, I’m all for White Christmases, but it was just a little too much for us. I can deal with the frozen water lines, and carrying 20 buckets of water day and night to the animals. It is beautiful after dark, traipsing around the farm and not even needing a light. It was fun tracking all the wildlife with the kids in the snow. We didn’t realize just how curious the coyotes were, until we saw where the tracks led and actually caught up with the sneaky coyotes several times. They don’t hide as well when the backdrop is white. We didn’t actually see any racoons, but we sure saw their tracks. And then we covered the pen containing all of our new little laying pullets. They’d be a tasty snack for raccoons. 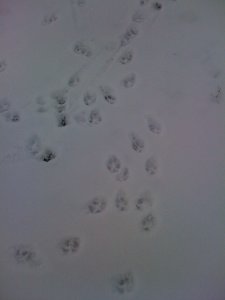 We are hoping to at least complete a few more weeks of the winter season. I doubt we will finish the entire 6 weeks remaining, but hopefully 3 or 4 more weeks will be doable. So, our plan is to continue with regular weekly harvest/deliveries as long as we can. Then, we will give everyone a credit for the weeks that we don’t finish, good toward next winter’s season.

I would love to give credit toward spring or summer, but the reality is that we need that money to get going for the new year. We’ve lost a month of farmers market income, and we won’t have much, if any, surplus produce to sell in January. We need to pay our bills, and Luis, and buy supplies for the new season. Supplies that we will need in February.

We also need to replace/repair the two greenhouses that we lost to the heavy snow, even though we scraped the snow off several times. Here you can see the frame smashed under the snow, and Mike cutting the plastic on another greenhouse to relieve the pressure and save the frame. 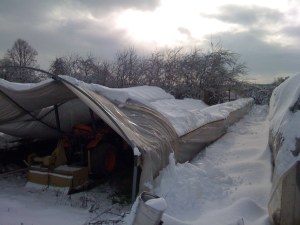 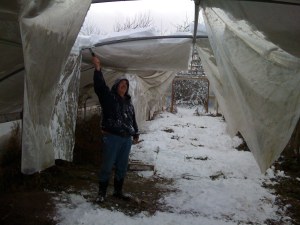