I have always had an obsessive personality. Even as a kid I would focus on something, completely absorbed, and get angry when I had to stop for dinner. My dad called it “persistence”. He admired the stubborn-ness, maybe because he had it too. I admire it in my kids, even though it makes me crazy. What can I say, passion is powerful stuff. So, it’s no wonder that now that I’ve discovered bees, I am fascinated, drawn-in, and they consume most of my thoughts these days. I’m sorry if many aren’t interested. But this is my soapbox, and I will try not to bore anyone.

As soon as the rain clears up these bees are out the door, ready to bring home the goods. If you try to stay below the entrance, not as many bees run into you.

I try not to bother the bees too much, even though I would love to open up the boxes every day and observe. I managed to stay away for three weeks after Cosmo and I picked up the new colonies. Two weeks spanned before I checked last Friday and I was astonished at what I found. They were both getting ready to swarm! Swarming is not a bad thing for bees, it’s only really bad for humans keeping bees. When things are going so well in the colony that the bees run out of space for babies and food, the workers start plotting the mutiny-of-sorts. They start building queens—this is not the queen’s job, she just lays eggs, and the workers decide whether they should be workers, or drones, or queens. What happens in swarming is that as the baby queens mature, but before they hatch, the queen leaves in a ball of bee glee—roughly half of the colony will gorge themselves on honey and leave the hive and go in search of a new home. They leave behind the remaining food (honey and pollen to feed babies), half of the workers, and incubating queens. If multiple queens survive to hatching, they duke it out in a sting-fest and the strongest one becomes the ruling egg-layer.

An interesting fact: A swarm is actually the safest time to get up close and personal with bees. They are as happy as bees get—stuffed with honey (and therefore unable to sting) and ready to settle down. So, that said, if you ever find a swarm hanging in a tree or on a bush, please call me immediately and I will come and get it. I’ve seen two in my life and they really are amazing to see. 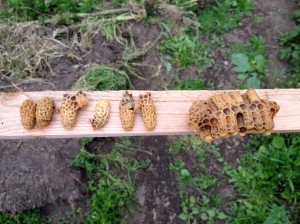 Seven queen cells and a chunk of drone brood removed from a hive.

But, as a budding beekeeper, I did not want half of my bees to disappear and leave my remaining colonies potentially weaker. Fine for them, but half as many bees only make half as much honey. So, I did an experiment of sorts. I divided Hive #1 into two. This is called a “split”. I took three frames of brood (baby bees and eggs, covered with workers), with two queen cells attached and put them into a new empty box. I left the old queen and all the remaining brood and bees in the old box. So far so good, no swarm yet, but they need to be coddled. There aren’t as many bees to take care of the brood, or keep them warm, so they need to be fed well and left alone. Then, in Hive #2 I rearranged the frames to create more open space (to convince the bees that it was not crowded), and I put a honey super (another box) on top so they had plenty of room to expand. I also removed all the 8 queen cells that were installed. They look like peanuts. Hopefully that will do the trick, and all the bees will stay around to make blackberry flower honey. My fingers are all crossed.
The blackberries are loaded with buds and ready to pop as soon as the weather warms again. The peas are loaded with pods and waiting to sweeten up with some warmth as well. They’re just not quite sweet enough yet—believe me, I’ve been testing them plenty. We’ve got the first plantings of basil, cabbage, fennel, and much more. Next week is a big one for planting—thousands of broccoli, cauliflower, more basil, thyme, parsley, and more lettuce varieties.
The dahlias have popped up in the cutflower garden, and we’ll be putting in the final planting this week, including the zinnias and sunflowers. Summer is around the corner!