Making pickles can be quick—I put this jar of slicers together in about 15 minutes. And that’s because I decided to put a sliced onion in the jar so I unpacked and repacked everything.

With big cucumbers, you can do slices or spears to get more into the jar.

It is pickle season, but don’t fear! Refrigerator pickles are quick and easy! Here is the recipe and instructions I followed, more or less. Except I added a teaspoon of sugar and a teaspoon of curry powder. And a small onion, sliced. Here’s the article: http://smittenkitchen.com/blog/2014/07/easiest-fridge-dill-pickles/ 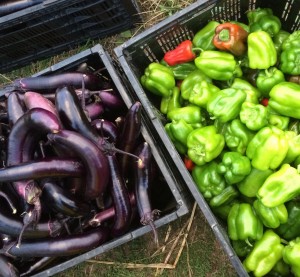 So exciting to have enough for everyone! Sweet peppers and Japanese eggplant.

I mentioned yesterday that eggplant were going to be in the CSA this week, and the responses ranged from joyful shouts to shouts of panic because people have never used an eggplant. Rest assured, these are Japanese eggplant, with thin skins and buttery flesh. The easiest thing to do is slice them lengthwise (no peeling necessary) and either pan sauté them or grill them. Then serve with a little soy sauce. You can also get crazy and make baba ghanoush or other fancy things. 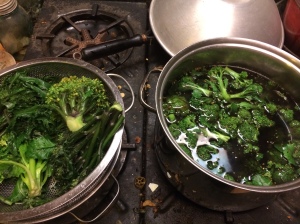 Before freezing many vegetables, they need to be blanched to kill enzymes that could transform food while frozen. I just drop handfuls into boiling water, remove when starting to get tender, drain in a colander. Then I rinse in cold water and pack into bags. 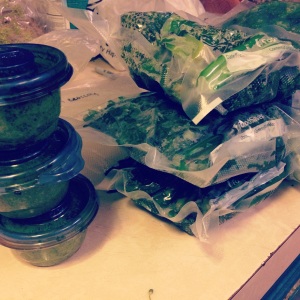 We have pesto for dinner on Mondays, so instead of just making enough for dinner, I stuffed the food processor twice and made enough for four dinners—three go into the freezer for later. I also put away six meals worth of broccoli.

If you are overwhelmed with produce, put some away for later. I used to try to set aside whole days for food processing, but I never could find the time. Now I do just a little extra several times per week and it really adds up. I love my vacuum sealer–keeps fruits and veggies fresh for months in the freezer!

I found this little guy while picking cauliflower. He’s working hard to keep bugs out of your veggies!

There are a lot of great things coming along, as the weather and daylength start to shift into Fall. There are only two weeks left in our Summer season, so if you want to continue into September and October, make sure you’re signed up!

Have a wonderful week!