• The U-Pick Garden is suffering from drought and lack of weeding. There are some flowers, but you’ll need to work for them.

I’m not gonna lie. This weather has made me a wreck. I’m working at not complaining; summer’s heat is how we appreciate winter’s wetness. But we’re struggling over here to keep up with all the work and watering.

Long evenings pruning tomatoes at 90+° mean that I get to see the moon rise.

The heart of the issue is that we are currently farming four seasons of crops. Summer crops aren’t the only thing going right now. We’re also planting for fall (think greens, squashes, onions, peppers, and tomatoes), Winter (leeks, brussels sprouts, roots), AND Spring (overwintered broccoli, onions, etc.). That means the farm is fully being worked and cultivated. We need to be aware of all the things, and all their needs. And watering 24/7 is very difficult on city water, not to mention expensive.

Early morning water moving. These beans need to be drip-taped, but there was no time that day and they needed water or they’d die.

If climate extremes are here to stay, I’ll have to make different choices about what to grow in the hot months. Leafy crops are definitely suffering. I just don’t have the water for things that need sprinklers. Drip tape crops can be watered so much more efficiently, and cover much more ground at one time with no loss to evaporation or weeds. 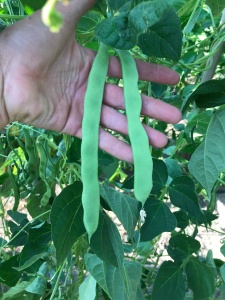 Romano Beans are loving the heat. They’re trellised, so as long as they get watered every 2-3 days they’ll be tender and productive.

Onions have dried up and are done with water. They just need to be harvested. Carrots and beets are happy on maintenance levels, but there won’t be any to harvest for a few more weeks.

Sadly, the UPick garden was sacrificed to the water gods. I simply couldn’t give up water needed for food crops. There are zinnias and sunflowers in there, and hopefully with the cooler weather they can be encouraged to flourish. The beans I planted germinated very poorly, and I can’t justify replanting the seed this late in the season. It’s very discouraging, and it makes me quite sad that I haven’t been able to follow through on that promise. 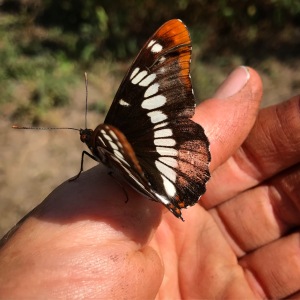 With all that said, I am very optimistic about the fall and winter. There are plenty of brassica crops settling in, even though Cosmo has had to do rabbit patrol nightly to keep the bunnies from mowing the whole planting down. The onions fared very well, and it will be good to have them harvested and tucked away for later. The squashes are starting to bloom and set, and the leeks and celery are looking mahvelous. Carrots and Beets are going in the ground this week, as soon as the hot weather breaks and we can water often enough to keep them moist through germination. In two weeks all the winter greens will get planted as well. After the first cultivation, at the end of August, the big hump will be crested and days will be noticeably shorter.

Until this year I didn’t realize that Hummingbirds love bean blossoms! There have been several that fly in and out of the bean greenhouse, whether I’m in there or not. And now, they are frequenting the pole bean rows outside. We have several Anna’s Hummingbirds that overwinter and nest here, and as a result, the whole families are chilling in the beans, sitting on the wire and chattering.

So, my apologies for being sparse with communication lately. But there’s a big update!