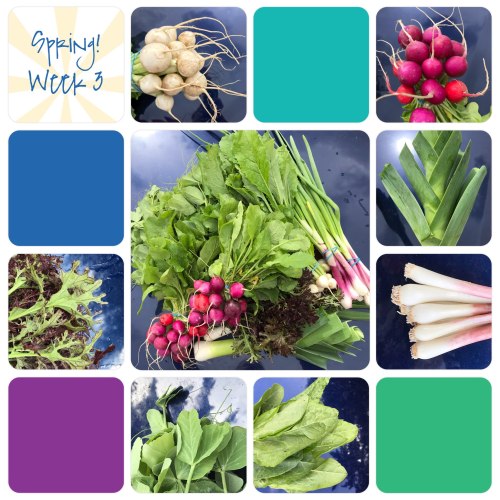 Spring is in full-swing now, and there’s not enough time in the day to get everything done. Please accept my apologies for not answering emails promptly. To add to the usual craziness, the walk-in cooler broke, and the estimate for repair was higher than expected, so we’re having to reduce the size of the cooler area and use a new system. This means all harvesting needs to be done the day of distribution, which is just a bit stressful. Hopefully it will be up and running by  next week!

It’s hard to believe, but its already time to plant fall and winter crops. This is a Brussels Sprout seed. They’ll grow in the greenhouse for a month or so, then get planted outside in June, and they’ll be ready to harvest October through the end of CSA season.

The ground has dried out nicely, and we’re getting it worked up as quickly as we can. Fertilizing is a must, and soil-testing has shown that the soil here is deficient in many minerals. Not surprising considering how much rain washes through the soil in the winter months. I’ve become a convert of remineralizing, as well as fertilizing with the Big Three (nitrogen, phosphorous, and potassium). I truly believe that mineral-rich soil grows more nutrient-dense food, which makes for healthier humans. The crops I’ve grown on these improved sections also seems to taste better.

Gypsum is a rich source of sulfur and calcium. Our soils are deficient in both, and sulfur is necessary for plants to effectively metabolize nitrogen so that they can grow and photosynthesize. The minerals in gypsum originated from ancient hydrothermic vents, and other volcanic activity. Fun Fact: The White Sands of New Mexico are made of grains of crystallized gypsum.

Our soils are deficient in Magnesium and Calcium, and that’s what Dolomite Lime is made from. Most dolomite originated as ancient seabed sediments.

I believe strongly in remineralizing our rain-leached soils with rock powders. Azomite is mined in Utah from a 35 million-year-old volcanic ash deposit, inundated by an ancient sea. It’s brimming with Potassium, Calcium, and Magnesium, but also packed full of trace minerals.

The season of dependable rain has passed, and as quick as crops are planted they need to be irrigated. Sprinklers and drip-tape are running constantly. Even with the increased water, the sudden shift in daylength and temperature with the sunny days and frosty nights has caused many crops to bolt, or start flowering. This is normal every year, and this transition week is tricky as far as diversity of product is concerned.

And this is how Salad Turnips look after they’ve been washed. So pretty!

Because of this, I’m considering skipping next week’s CSA. I have a lot of radishes, turnips, and garlic, and not a lot else. I’m not sure it’s worth everyone’s time to pick up three items. Besides, I could use the extra days of not harvesting for getting crops in the ground. fixing the walk-in cooler, and setting up irrigation. If I do skip one week, it will be made up at the end of the year with extra storage crops and brassicas.

Enjoy the sun, and happy May Day!