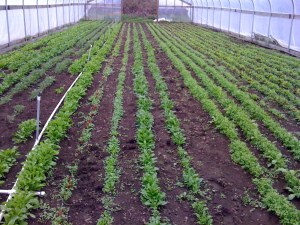 Salad in the Big Greenhouse
Last week, as it snowed, we informed everyone that we wouldn’t be able to start our spring season on time. Overwintered crops in the field hadn’t started regrowth yet, and the greens we planted in the greenhouse in February had just barely come out of the ground.
How quickly things change. This week is Spring Break for our school district. I was dreading having the kids in the house for a whole week because it would be raining or snowing. But it has been a beautiful week. Sunny and warm, who would have guessed. At the beginning of the week, we planted the fruit trees we bought last week—we drove to Raintree Nursery and enjoyed a snowy, scenic drive. Luis built a nice arbor in front of all the greenhouses for our new grape vines—we bought 10, 2 each of 5 varieties. The kids were disappointed that they’ll have to wait until next year or even the year after—they wanted grapes that day. We also picked up two pie cherry trees, and 11 different sugary, European plums. Some rose bushes (the tough kind with big hips, kind of like me) for the house, and lilac trees to line the new driveway. 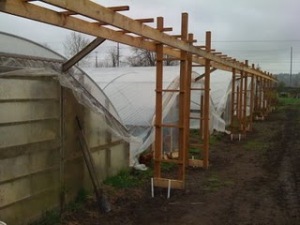 The New Grape Arbor
After things dried up a little, Mike got very busy on the tractor. It took two days of plowing and disking to start getting ready. Luckily Luis has spent the last few weeks pulling up the old plastic mulch, so we’d be ready. Luis has been planting the Walla Walla onions, and onions sets for green onions. The kids and I planted fava beans and peas, and Mike will handle the carrots, beets, spinach, arugula, and whatever else we can think to throw in the ground between today and tomorrow. Hopefully the showers will be minimal until Sunday. That will give us two more days.

Here are the kids in one of those brief moments of working together without fighting. Cosmo is counting out four beans for every two steps and Della is covering them up in the trench. (Actually she’s probably saying, “Hurry up, Cosmo, you’re going too slow!” And then there was probably a fight.)
Saturday we were able to get nearly all the potatoes planted before the rain started (that’s only about two months earlier than last year!), and the peas are planted, and about 5,000 Walla Walla onions (that’s only half of what we bought, you lucky onion-eaters). The other half will get planted next week, and then the torpedo and cipollini, and storage onions. Luis also got 60# of onion sets planted—we use those for early green onions, before the seeded ones are ready to harvest.
Now, it looks like we’ll be starting our spring season next week. The arugula is big enough, and the rapini is starting to do its thing. I just hope we can consistently get through the first few weeks. So far things are looking good for the season. Last year we didn’t plant peas until May, and potatoes and onions didn’t go in the ground until June, which was too late to do any good at all.

4 responses to “>Is Spring Here, Really?”